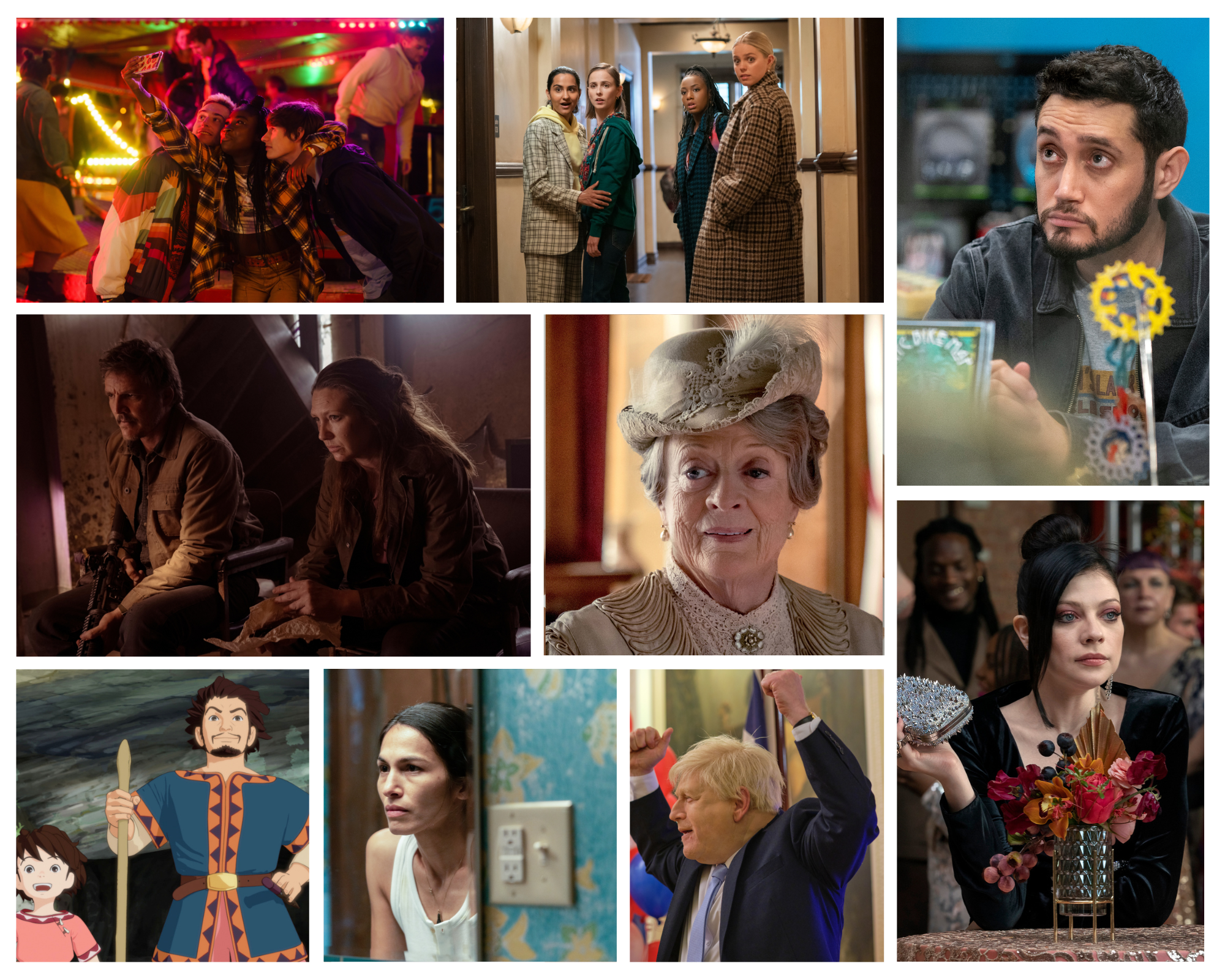 From new seasons of existing favourites to long-anticipated renditions, here are some of the best series to watch on Showmax this January.

One of Variety’s Most Anticipated Streaming Titles of 2023, HBO’s The Last Of Us is set 20 years after modern civilisation has been destroyed.

Joel (Critics Choice Super Award winner Pedro Pascal from The Mandalorian and Game of Thrones) is hired to smuggle 14-year-old Ellie (BAFTA Award winner Bella Ramsey from His Dark Materials and Game of Thrones) out of an oppressive quarantine zone. But what starts as a small job soon becomes a brutal journey as the pair traverse the U.S., depending on each other for survival.

Based on the smash hit video game of the same name, the series is written and executive produced by Emmy winner Craig Mazin (Chernobyl) and Neil Druckmann from The Last of Us and Uncharted video game franchises.

BAFTA winner Merle Dandridge (The Flight Attendant) and BAFTA nominee Jeffrey Pierce (Castle Rock) reprise the roles they voiced in the game franchise as Marlene and Tommy respectively, while Ashley Johnson and Troy Baker – who voiced Ellie and Joel in the games – are among the guest cast.

HBO Max’s The Sex Lives of College Girls follows four college roommates at the fictional Essex College. The new season picks up with the students returning after their fall break, tackling the challenges thrown their way at the end of Season 1, and facing their next semester filled with new faces, parties and predicaments.

Created by six-time Emmy nominee Mindy Kaling (Never Have I Ever, The Office) and Brooklyn Nine-Nine writer Justin Noble, S2 of the 18SNL-rated series has a 92% critics’ rating on Rotten Tomatoes, where the critics’ consensus says, “Bawdy and sweet as ever, The Sex Lives of College Girls continues to excel as a refreshing twist on youthful indiscretions.”

HBO Max has already renewed The Sex Lives of College Girls for a third season.

The six-part Sky Original drama takes us inside the halls of power during Johnson’s tumultuous first months as Prime Minister, as he grapples with Covid-19, Brexit, and a controversial personal and political life.

In their five star review, The Evening Standard calls This England “splendid television, history distilled on screen… Watch it and weep.”

Based on the Argentine series La Chica que Limpia, crime drama The Cleaning Lady follows a whip-smart Filipina doctor (Elodie Yung from The Hitman’s Bodyguard and The Defenders), who comes to the US for medical treatment to save her son. When the system fails and pushes her into hiding, she becomes a cleaner for the mob and starts playing the game by her own rules.

Nominated for a 2022 Hollywood Critics Association Television Award for Best Broadcast Network Series: Drama, the series has been compared to Breaking Bad, with Paste saying, “The Cleaning Lady is a fast-paced portrayal of a woman pushed to the edge and forced to contend with hard decisions for the wellbeing of her family… Yung’s central performance is filled with warmth, determination, and grit.”

It’s the second semester of junior year, and Gossip Girl is leaving no stone unturned in her effort to control the scandalous lives of Manhattan’s elite. She’s learned a thing or two from her first go-round, namely: what her audience wants, they shall get. It’s time for her to turn the heat up on what’s been simmering (Julien, have you met Monet?) as well as look at her own impact, and how she can make it more catastrophic than it was before. Even if that means lying to do it. Old enemies, new allies, constantly shifting sands — this semester, there can only be one queen, and by the end of the school year, everyone will know where the bodies are buried, and just who was holding the shovel.

Picking up with a new generation of New York private school teens at Constance St Jude’s, the reboot’s launch saw it trending at #1 on Twitter and generating over 15 billion total social impressions, pulling in a record number of viewers over Part 1’s first weekend on HBO Max in July last year.

Season 2 has a 100% critics’ rating on Rotten Tomatoes, with The Wrap saying, “What this season does well is truly a delight.”

The third and final season of the multi-award-winning HBO and BBC One fantasy epic His Dark Materials is based on The Amber Spyglass, the final novel in Philip Pullman’s Carnegie-winning book trilogy, which was listed among Time Magazine’s 100 Best Young-Adult Books of All Time.

Season 3 follows Lyra (MTV Movie Award winner Dafne Keen from Logan) and Will (Emmy nominee Amir Wilson from The Letter for the King) as they journey to a dark place from which no one has ever returned. As her father’s great war against the Authority edges closer, they will learn that saving the world comes at a terrible price.

Season 3 is the best-reviewed season yet, with an 89% critics’ rating on Rotten Tomatoes, where the consensus says, “In perhaps its most stirring season, the final instalment of His Dark Materials rewards its viewers with a heart-wrenching conclusion befitting this faithful adaptation.”

New money means no mercy as Mike Prince takes the Axe Capital throne in Season 6 of Billions. Chuck Rhoades is convinced no one should have that much wealth – or power. As all the players seek out new alliances, only one thing’s for certain – wealth means war.

Nominated for five Critics Choice Awards, Billions has a 100% critics’ rating on Rotten Tomatoes for Season 6, and is already renewed for a seventh season.

Run the World follows a group of Black women who work, live, and play in Harlem as they strive for world domination, not just surviving but thriving together as they navigate relationships and the professional world.

The four best friends are played by Black Reel Award nominee Amber Stevens West (22 Jump Street) as Whitney, Andrea Bordeaux (NCIS: Los Angeles) as Ella, Corbin Reid (Blair Witch, How to Get Away with Murder) as Sondi, and Bresha Webb (Night School), who was nominated for a Black Reel Award for Outstanding Actress, Comedy Series for her role as Renee.

Already renewed for a second season, Run the World has a rare 100% critics’ rating on Rotten Tomatoes, with The Hollywood Reporter saying, “Fizzy yet substantial, Run the World offers exactly the feeling you’d want while catching up with an old friend over cocktails: It’s giddy, gossipy and gladdening.”

Nominated for three 2022 Emmys, The First Lady takes us into the East Wing of the White House, where some of history’s most impactful decisions have been hidden from view, made by America’s charismatic, complex and dynamic first ladies.

Spanning three different political eras between 1933 and 2017, the show is headlined by triple-Oscar nominee Michelle Pfeiffer (French Exit, The Wizard of Lies, Ant-Man and the Wasp, Frankie and Johnny) as Betty Ford, Emmy winner Gillian Anderson (The Crown, Sex Education, The X Files) as Eleanor Roosevelt, and Oscar winner Viola Davis (The Woman King, Ma Rainey’s Black Bottom, The Help, Fences) as Michelle Obama. Davis was nominated for a Black Reel Award, while Pfeiffer is up for Best Actress in a Limited Series or Movie Made for Television at the 2023 Critics Choice Awards this week.

TELL ME EVERYTHING S1 | Binge now

ITV’s provocative and funny coming-of-age teen drama Tell Me Everything follows 16-year-old Jonny Murphy, who is secretly struggling with undiagnosed depression and anxiety following a tragic event. He and his friends navigate the stresses of teenhood amidst omnipresent technology and social media while searching for their own identities, exploring their sexuality, and experimenting with relationships, drink, drugs and sex.

In their four star review, Evening Standard praised the series as “a glorious tribute to smalltown British adolescence” that “revives the genre in a refreshing and natural way.”

Based on their multi-award-winning 2017 digital series, Flatbush Misdemeanors has a 100% critics’ rating on Rotten Tomatoes.

Vulture included the second – and final – season in their roundup of the Best TV Shows of 2022. As they say, “Each episode of Flatbush Misdemeanors is packed with pointed social commentary and likeable performances – in particular from the immensely talented Dodson – but at its core, this is a series about the effort needed to maintain the relationships that mean the most to us but that we might take for granted.”

Narrated by two-time Emmy winner Gillian Anderson (Sex Education, The Crown, The X-Files), Ronja, the Robber’s Daughter is an epic, Emmy-winning animated series from Studio Ghibli (Spirited Away, My Neighbour Totoro), based on the bestselling book by Astrid Lindgren (Pippi Longstocking).

Ronja is a 10-year-old girl born into a band of robbers. Over the course of 26 episodes, she befriends the son of her father’s rival and explores the beautiful but frightening forest, which is full of strange creatures.

In their four star review, Common Sense Media recommends Ronja, The Robber’s Daughter for children over the age of seven. Collider calls the show “a masterful, magical exploration of life itself”, praising the central relationship as “amazing to watch, especially for an animated kids’ show. It ranges from childlike curiosity, to immature rivalry, to outright hostility and distrust, to mutual friendship, to young love; every step along the way is masterfully handled and every bit as complicated as real-life relationships.”

A French entrepreneur uses young punk talent to reinvigorate fading fashion couture houses and become the richest man in the world. What could possibly go wrong?

From the Emmy-winning and BAFTA-nominated filmmakers behind McQueen and Rising Phoenix, the four-part docuseries Kingdom of Dreams goes into the world of high fashion to reveal the dark side of a billion-dollar industry.

“Ground-breaking creativity and high-stakes business come together,” says Mail on Sunday, in what Radio Times calls, “A great story, lavishly illustrated,” and The Times says is, “visually sumptuous.”

SINS OF THE AMISH | Binge now

Sins of the Amish, a two-part documentary series, exposes the plague of sex abuse in the Amish community and the broken criminal justice system that has failed to protect the victims. The true crime series profiles survivors as they bravely tell their deeply personal stories for the first time.

The Daily Beast calls the series “a horrifying portrait of the pattern of dark behavior and victim silencing that has pervaded the Amish community for generations—and gone largely unnoticed” while Decider hails Sins of the Amish as “intensely personal” and “harrowing.”

Okay, this isn’t technically a series, but Downton Abbey, the movie, continues the story of the beloved, multi-award-winning historical drama series as the Crawleys and their intrepid staff prepare for the most important moment of their lives: a royal visit from the king and queen of England. The auspicious occasion soon unleashes scandal, romance and intrigue, leaving the future of Downton hanging in the balance.

Nominated for two Critics Choice Awards, the film has an 84% critics’ rating on Rotten Tomatoes, with Times (UK) calling it “utterly, ineffably, and often fabulously, Downton.”

Previous
How South African gamers are monetising their passion

Next
Samsung debuts compelling Galaxy A14 5G at #CES2023