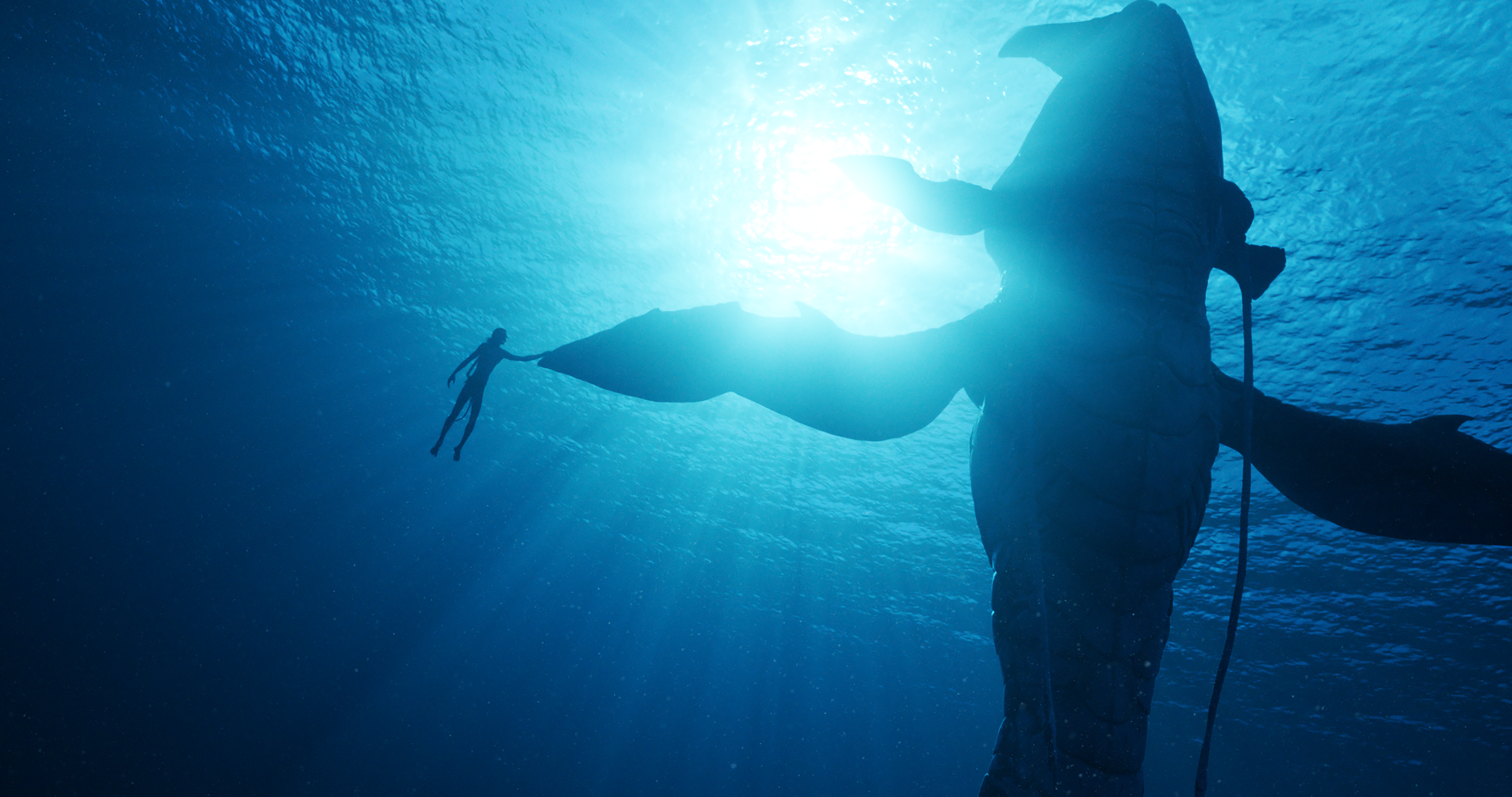 Avatar: The Way of Water sticks to the surface of a shimmering ocean

Cinema as a medium is measured in two different ways. In one way, we attribute value and relevance based on it being a storytelling device. Films can speak to us, reflect the world around us, or challenge our norms and that of society with complex, provocative and creative ideas. I think of films such as Blazing Saddles, Network or Who Framed Roger Rabbit that don’t necessarily transform the medium but strengthen and elevate it within the global psyche. The other way are films that have a hand in actually transforming the medium, technical milestones that are akin to the advent of talkies and ever-higher definition.

11 years after its release (and following a rewatch just last week), we can determine James Cameron’s Avatar is definitively in the second boat. We must give credit where it’s due. It is a landmark. Avatar not only repositioned 3D viewing away from being a gimmick but also jumpstarting the IMAX movement. Hollywood blockbusters now have to live up to the experiential benchmark it set.

But Avatar does not enjoy much of an influence beyond that in our greater cultural canon and how we receive its sequel, Avatar: The Way of Water helps put that fact into perspective. Again, credit where it’s due. The Way of Water is technical cinematic beauty executed by pure expertise. But just like its predecessor, I’ll probably forget about it for the next 11 years.

More than a decade after switching sides and defending the planet of Pandora and her native people, former marine Jake Sully (played by Sam Worthington) has settled in his position as leader of the Na’vi tribe and fostered a family with his partner Neytiri (Zoe Saldaña). The family includes eldest son Neteyam (Jamie Flatters), his younger brother Lo’ak (Britain Dalton) and their youngest sister Tuk (Trinity Jo-Li Bliss). Completing this family is Spider (Jack Champion), a young human who was left behind when the humans aka sky people departed, and Sully and Neytiri’s adopted daughter, Kiri (Sigourney Weaver).

But peace on Pandora was never in perpetuity as the sky people have returned in pursuit of the planet’s natural resources and have uprooted the Na’vi in the process. Complicating Jake and Neytiri’s resistance is the return of Colonel Miles Quaritch (Stephen Lang), resurrected as a Recombinant or “Avatar” following his death at the hands of Neytiri and who is now out for revenge against her and Jake. Threatened by death and destruction, the Sully family faces trials and tribulations within and without. The fight to survive and stay together has begun.

The Way of Water is visually spectacular. Cameron’s perfectionism combined with a longstanding love of the ocean has produced a film that transcends the first in both scope and technical prowess. Water has never looked this good on the big screen. Pandora’s bodies are filled to the brim with colourful and vibrant life. Alien equivalents that reflect the fauna and flora we know of here on Earth but that also take on an aura of spiritually thanks to the teachings and customs of the Na’vi. Regardless of Cameron overindulging with scenes that feel like they could have been cut, it’s still amazing to watch and admire the world he continues to build and expand.

The same is said for the action. While the film takes its time exploring family dynamics and the ocean during its first two thirds, the final third is trademark Cameron exhilaration. The choreography of the action is astounding with all players participating in a battle for their lives and those they care about. Aided by the impressive visual effects and a score by Simon Franglen (channelling the tribal and tenuous tones of previous film composer James Horner), none if it lets up for a second. The finale also compensates for octane shortcomings earlier on. Because much of the focus is directed on the Sully children and their obstacles in life and the culture around them, action takes a backseat for a good chunk of the runtime in favour of character interactions and overall world building.

Make no mistake, the world is where the focus should be. Like with the 2009 Avatar, there’s little innovation happening on a personal or narrative level. The most damning critique to say is that the story is exactly the same as before but with a cautionary tale about the environment taking place at sea. Human greed collides with nature and innocent people of the land suffer for it. It’s not an unfair critique but this time it gets points for the stronger, more exciting finale. And let’s face it, this archetypal narrative was already perfected back in 2009.

That said, the film’s archetypal characters have not changed since then either and they suffer from both the cliches of a group of kids getting into trouble and with teenager dialogue that sounds like it was written during the 2010s (which it potentially was). There’s also a lack of focus thanks to the sprawling cast. While the central conflict lies with Jake and Quaritch, and Neytiri gets a significant chunk of the finale’s emotional payoff (even though she is relegated to a much minor role throughout), much of the film centres on middle child Lo’ak, the relationships he develops and him butting heads with his father. Spider also gets a lot of attention but his motivation is disjointed. The human’s subplot, along with that of Kiri’s (one that is, fairly speaking, more self-explanatory), feels like it’s stuck in a holding pattern, hovering above everything else that’s happening. There are so many moving parts to The Way of Water which does keep the pace up (it needs to be, these movies are long sits), but more moving parts means a malfunction with one can cause others to fail. And that failure, as was the case the first time we visited Pandora, means we are left caring more about the planet and less about its inhabitants.

Avatar: The Way of Water is an event. It is a movie in all capital letters in Papyrus font. I do recommend it. Go see it on an IMAX screen. Enjoy the work of a director who knows how to use 3D to his creation’s advantage. There is a fun time here and it reminds us of the magic of cinema and the definite blockbuster experience. But once the water has calmed and the credits roll, it’s quick to disappear over the horizon.

Avatar: The Way of Water debuts in South African cinemas on 16 December.